Since 2015, I've done a 'fantasy advent calendar' every year - coming up with an idea of a show or a game that I wish existed each day.

This year, I'll be making some of them as I go.

There will be a new game added to this page at least every-other-day (on the days where there's not an actual game, there'll still be an idea for one on my socials). They'll range from light solo games you can play whilst running errands, to group games of survival horror for Zoom, to strange text-adventures and more.

There's a suggested donation of $12 - as there'll be at least 12 games will be added to this page - but you can get them for free. Ultimately the fantasy advent calendars have always been about having fun, trying things out and feeling creative - however, this year's is more effort than most, and if you enjoy any of the games, do support if you can.

There's pdf, epub and word doc versions of each game.

Day 1: How They Haven't Gone (a solo or group game about being the last surviving member of a party, inspired by Montaigne's song Consolation Prize)

Day 3: There's a Cave in Your Chest and People Think It's a Dungeon (a solo, zero-materials game about exploring painful feelings through imagined stories)

Day 5: This World Will Collapse Under the Weight of Us (a GM-less group game of strange and abstract powers inspired by NK Jemisin's short story Stone Hunger)

Day 7: Bridge (a zero-materials game about multiversal travel, inspired by the structure of my game Bear and media like Severance and The Body Keeps The Score)

Day 8: This Can Be True If We Say So (a discord-based larp about grappling with messy feelings at a wedding, but still trying to take nice pictures through it all)

Day 9: How Very Convenient (a gloriously silly game about being a grizzled PI interrogating a teabag whilst making a cuppa)

Day 11: The Latest Meeting of the Verifiers of Indications of New Extraterrestrials (V.I.N.E.) (an online larp using VINE compilations as potential evidence for players to theorise about and build stories from)

Day 13: Oblivion Feels Like Rainfall (a solo game about journeying down the River Lethe, to be played whilst walking in the rain)

Day 15: Doing It Every Day Is the Hard Part (a solo walking game about taking care of yourself, through the lens of taking a dog for a walk)

Day 17: I'm Doing This For Revenge (a game to play whilst running errands, and secretly preparing for the Big Cinematic Showdown you're training for)

Day 19: Murdrum (a digital game about working in an agency that attempts to undo attempted murdrums (secret killings) that involve corrupting someone's language. Trigger warning: this game explores aspects of abusive/manipulative relationships, specifically the twisting of concepts and words to normalise abuse. The game largely consists of dialogue where this is happening or its impact is found in casual conversation.) This game is available to play in browser here.

Day 23: Tell Me How To Be (a solo game of of indirect care where you provide coaching and reassurance to an inanimate object) 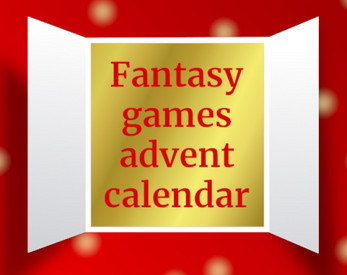